Bet Less Win More is a (predominantly) horse racing based tipster service which is operated by Gary Boswell, aka “The Boz”. He says that his aim is to slowly build profit for subscribers.

When somebody refers to themselves as “the tortoise of the tipping world” I am not quite sure what to make of it. Especially pared with a headline that reads “Slow and steady wins the betting race – the tortoise makes long term consistent profits not the hare”. There is a certain sound logic to this, however I have found that in my experience, just because something sounds right. That doesn’t necessarily mean that it is.

None the less, I do like the idea of consistent profits, and there are also some additional elements to Bet Less Win More that suggest that there could also be a big pay day in line should things go to plan.

Honestly, Gary Boswell has put together quite a multifaceted product in Bet Less Win More and there are certainly some things that sound interesting, if not exciting. The questions however is whether or not the service can deliver on this.

The setup for Bet Less Win More is rather different to the majority of tipster services that I am used to looking at. Rather than emailing out selections on a daily basis, Gary Boswell uploads everything to a member’s area on his website.

For reasons that I will explore, this is actually quite important and is a big part of what makes Bet Less Win More stands out for me. The core of these daily tips are the “Less is More” tips.

These bets are focused on one race with multiple horses advised. There is typically one lay bet and usually (although not always) at least one horse that you are advised to back. As such, even with the accumulator betting side things (a topic I will come to shortly) Bet Less Win More is a pretty low volume service.

There are a variety of different odds which are available for bets, however by and large Gary Boswell offers advice as a part of the detailing of the tip. Realistically, if you are looking to get the most out of Bet Less Win More, especially on the backing bets, Oddschecker will serve you well.

Whilst I have talked about the “Less is More” bets that come with Bet Less Win More, I also want to discuss the “Staggered Football Acca”. These are a long term series of bets that whilst not technically an accumulator per se, do involve compounding stakes from each bet in order to produce a big win.

As the name of these bets suggest, everything is based around football betting, typically backing an outcome.

There are specific stakes which are advised for all bets however these are typically low. In fact, most bets that you place through Bet Less Win More will be less than 0.5 points per bet.

This is probably down to the fact that Gary Boswell recommends a betting bank of just 20 points for the Less is More element of Bet Less Win More, whilst the Staggered Football Acca side of things has a betting bank of 10 points.

Sticking with the numbers side of things, when it comes to the Less is More bets, there has been a strike rate of 83.33% on lay bets and 25% on back to win bets. These all come from a small sample size however.

Each selections come with an incredibly detailed essay on the race and why horses have been selected which also includes reflection on the previous days bets.

It isn’t very often that I will quote extensively, but here is a very small extract of an analysis from the 1st of December (probably amounting to about an eighth of the analysis for the day).

“The worry in backing The Steward here is the price – Moffat not known for landing odds on shots either and the Sporting Life tissue goes 4/9. Speaking as one who has already had his fingers burnt a couple of times by The Steward, I shall not be recouping much at 4/9.

Paddy Power have opened 4/5 but I do think laying at less than that will be likely and I’m in for laying this time because aswell as my perceived observation of no acceleration, I think we also have a huge question mark over distance and his ability to stay it.”

It is clear to me from this that Gary Boswell really spends time looking at a race and the analysis provided reflects this. There is a great amount of information contained within the essays that Bet Less Win More gives you, however this does have some caveats.

In focusing on just one race, there is less information that you could use to learn from compared to other tipsters which provide a more generalised analysis.

Gary Boswell has just one option available if you want to sign up to Bet Less Win More. This is a monthly subscription which is pieced at just £12.99 per month. I should highlight that there is also an option to trial the service for two weeks for just £1.

All payment is handled directly via Paypal and it is worth noting that there doesn’t appear to be any money back guarantee in place. Given the trial offering though, I hardly see this as a make or break issue.

The sales material for Bet Less Win More claims that over 2018, you could have made just under £10,000 following Gary Boswell’s betting advice. This is however to £100 stakes and as such, means that the realistic outcome would be between 95 and 100 points of profit for the year. 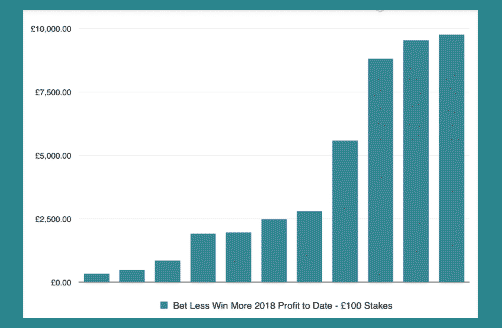 Frankly, this is somewhat disappointing, especially when you look at some of the income potential that is out there. It is also worth noting that this number doesn’t seem to factor in Bet Less Win More’s Staggered Football Accas. There is additional potential here to generate quite a substantial win should results go your way.

I want to start by saying that I like Gary Boswell. I think that his service is of a decent quality, the tips that he puts out are solid enough, and there is bags of potential in terms of value for money.

I could carry on, and I will (whilst expanding on the points already made), but I want to start by addressing the most important part of any tipster service and that is the income. I have been blunt about how this is an area that appears to be lacking, but the truth of the matter is that you are staking less than a point per bet.

As such, I feel that you can probably realistically increase the profit by adjusting to 1 point stakes. Furthermore, there is always the lingering hope that the Staggered Footy Acca gets big enough to be important.

Moving on, whilst I accept that the detailed reviews are somewhat more niche than other tipsters that have a similar approach, they are still an impressive read.

As mentioned earlier, I do think that in focusing on just a single race, Bet Less Win More doesn’t quite go into the kind of eye opening details that I would expect to see from some other tipsters. Ultimately, this means that you are losing less as you bet, however this is a small price to pay.

Bet Less Win More is incredibly inexpensive. Compared with some tipster services on the market, this is very competitively priced and as such, there is plenty of value for money can to be had. In and of itself, that is no small feat, but given how much potential there is, I think it is a proper bargain really.

Don’t get me wrong, I do think that Bet Less Win More is probably a bit harder work than your average tipster service.

But anybody who can follow instructions will be able to get on here, and for your efforts you will be rewarded. Gary Boswell hasn’t necessarily put together the best tipster service in the world, but it appears to be genuine, and it has made a profit.

Any service that can do this for less than £15 per month deserves at least some attention and consideration in my book.