The Horse’s Mouth is a new horse racing tipster service by an ‘anonymous’ tipster (for reasons I will get to soon). He claims to have made a lot of money through betting and guarantees the same for those who follow the service.

Introduction to The Horse’s Mouth

It has been a while since I have seen I have seen a service with claims that really blow me away (and I want to take the time, even at this early point in the review, to point out that I don’t mean this in a good way).

The headlining claim for The Horse’s Mouth is that the anonymous tipster behind the service should have won £5 million through bets. Unfortunately, he says, the bookies cap off their payouts at £1 million, so that was what he won.

With this in mind, and a number of other claims made about just how profitable The Horse’s Mouth can be for most punters, why wouldn’t you want to be on board? The answer is quite a few reasons, so let’s dive in and have a look at them.

What Does The Horse’s Mouth Offer?

However there are a few things that I can reveal. First of all, The Horse’s Mouth is a daily horse racing tipster service. The logistics are very basic really. Selections are emailed out to subscribers, you simply have to place your bet. The quality of these emails is lacking, if I am frank.

The bets themselves are almost exactly what you would expect. It appears that The Horse’s Mouth deals exclusively in win bets.

These cover a range of odds. There are usually between 2 and 4 selections provided each day. There is no a lot to report here, in part because The Horse’s Mouth has almost nothing to say about their service, but also, it is very very typical. As such, this also means that there isn’t a whole lot to talk about.

The Horse’s Mouth does not come with any real staking plan which is a further blow to the service in my opinion.

These are very basic things, and the fact that they are missing, does nothing to bolster the legitimacy of the service. If I were going to follow The Horse’s Mouth’s bets, I would probably be inclined to stick to level stakes of just 1 point per bet, based off a 100 point betting bank. Honestly though, I would probably rather just avoid it all together.

Finally, we come to the strike rate, or, as you may have guessed by now, the lack thereof.

This is yet another area in which The Horse’s Mouth doesn’t give us any information at all about what we can expect. There is a vague sense that there is little risk, but nothing is stated outright either. Rather interestingly. There is a claim in a “testimonial” for The Horse’s Mouth which claims 22 bets out of 29 have won. This would make for an effective strike rate of 75%. I do not believe this.

How Does The Horse’s Mouth Work?

I have mentioned the fact that the tipster behind The Horse’s Mouth is anonymous, however I haven’t really discussed the reasons for this. I have touched on the headlines for The Horse’s Mouth in which the tipster claims to have had a huge win. Arguably one of the biggest in UK history if it were true (which I don’t believe it to be).

From this money, he claims that he was able to set up his own stables and horse training centre. A fact that he has leveraged to apparently receive a lot of information.

He uses this to cheat the system, as he supposedly knows that his competitors are also cheating. Through various contacts, he is now able to speak to a variety of different people involved with the sport in order to “predict” winning horses.

There is only one option I you want to subscribe to The Horse’s Mouth, that is to pay a one time cost of £29.99. It is worth noting that there isn’t anything that states what kind of time scale you can expect to receive these selections for. This is concerning to me.

What I can realistically believe however is that you will receive selections for at least 60 days. This is mostly down to the fact that The Horse’s Mouth is sold though Clickbank and this is the money back guarantee that is offered on all of their products.

There are a number of claims made in reference to the earnings potential for The Horse’s Mouth. These range from £4,000 per week, as a minimum, to £200,000 in a year.

One of the testimonials also makes reference to “breaking profit of about £26,000 in the past five months”. Put bluntly, these numbers are a little bit over the place. This isn’t even the part that makes me most suspect of The Horse’s Mouth however. This, perhaps not surprisingly, comes down to a complete lack of evidence backing up the claims made.

Conclusion to The Horse’s Mouth

Honestly, there isn’t a single aspect of The Horse’s Mouth that I believe to be true. Sometimes, a product comes along that no matter how you want to look at it, there just isn’t anything good that you can take from it. The Horse’s Mouth is very much one of them. This is so much the case with The Horse’s Mouth, that I don’t actually know where to begin.

The service itself is very basic. 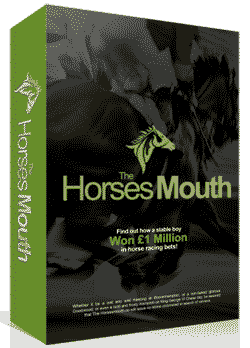 So much so, that I can’t help but feel that it really looks to do the bare minimum that you would expect from a tipster. There is then the way that the selections for The Horse’s Mouth are supposed to be made.

This lack of belief is not without reason. It is very apparent that there is no evidence provided to back up any of the claims made.

The tipster behind the service attempts to explain this away by saying that he needs to remain anonymous in order to protect himself and his business interests. Alternatively, it could be because the whole thing is made up and claiming the need for anonymity is an easy way of ensuring that you don’t have to provide any evidence.

For me, The Horse’s Mouth is clearly something that isn’t going to work. There is no evidence that it can work, the claims are clearly ridiculous, and digging deeper, the vendor who is selling the service has released 5 products this year.

This is highly indicative that my initial feeling is correct. With this in mind, it is clear to me that The Horse’s Mouth simply isn’t something that you should be wasting your money on.